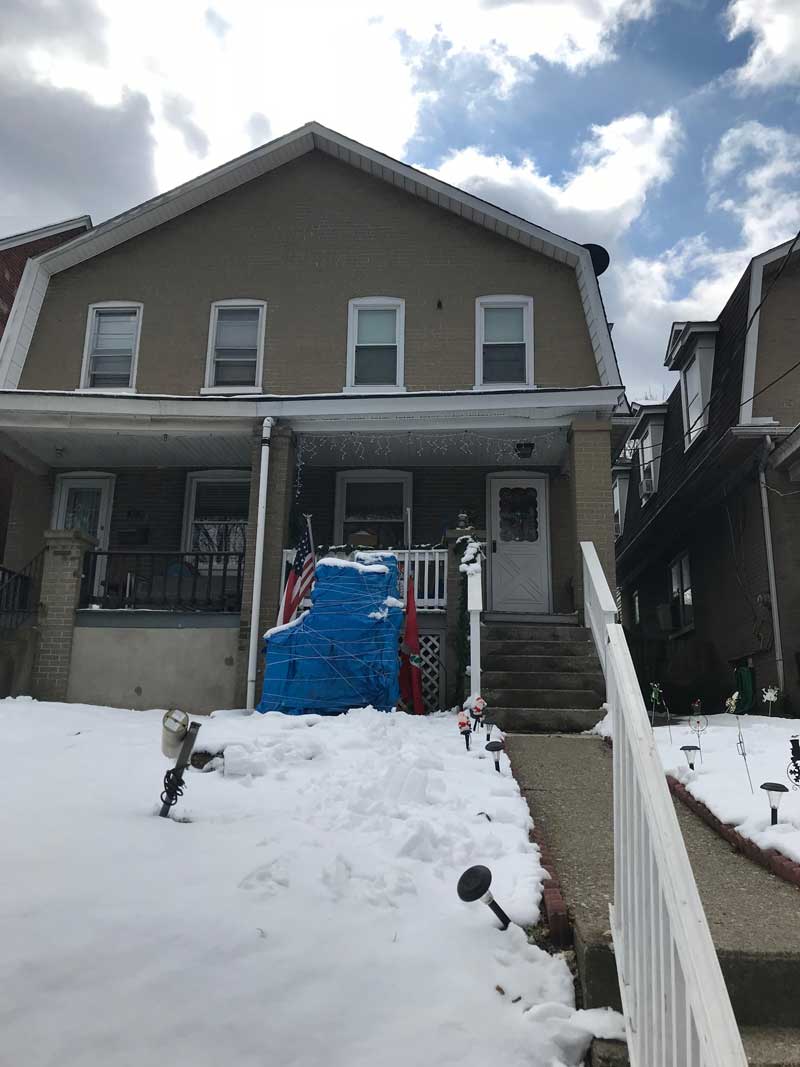 A homeowner in Easton, PA had a big problem: The township condemned his chimney. However, this didn’t mean he couldn’t have a roaring fire in his living room around the holidays. Instead, he would have to rethink his entire heating system.

Like many hvac systems, our homeowner’s heater used the smokestack for exhaust. Therefore, it needed to be structurally sound and properly ventilate the home.

However, after an inspection, our homeowner had to decide what to do: Should he repair or replace the stack? Or, should he invest in a new heating system that wouldn’t require one?

Both options would require a significant investment. Ultimately, however, our homeowner chose a new HVAC system. This way, he would save money upfront and over the next few years.

Problem: Township officials condemned the chimney for a twin home in Easton, PA.

Solution: Installed a high-efficiency gas furnace and power vent water heater that would not require one.

WHY DOES A CHIMNEY GET CONDEMNED?

A chimney gets condemned if it is deteriorated badly enough. There could be a structural problem. Or, it no longer gets rid of exhaust properly. These conditions can be hazardous to people in or around the house.

Like many homes built during or before the 70s, this home had a masonry structure. Over time, the brick and mortar can lose its integrity. Cracks are common, especially if you don't get the stack inspected regularly.

In this situation, moisture seeps into the structure. In the winter, when that moisture freezes, it can cause small cracks in the mortar to become much more extensive. If they are not repaired, they get worse and worse.

Water can also cause spalling. That’s when the water that seeps into the brick and mortar force the surface of the bricks to begin peeling off. You can see signs of this. Bricks may be crumbling away, or you’ll notice holes in the stack.

Ironically, maintenance can cause spalling. Using a pressure washer on the outside of your home at a higher pressure than 850 PSI can result in this water damage. But, it’s more commonly caused by rain and hail over the years.

Finally, flue damage can cause a problem. The flue is the actual duct pipe of the chimney. It’s the open interior that the exhaust travels through.

There should be a flue liner in the structure. The liner prevents the exhaust, which includes carbon monoxide, from escaping the stack before it reaches the top.

When that liner is damaged, the exhaust begins to damage the mortar around the bricks. That causes deterioration. Also, those gases can seep into your home. The liner can be replaced easily enough. However, you’d also need to address any damage to the exterior.

All this adds up to potentially dangerous situations. If the stack is damage to the point where it could fall over or leak exhaust into the home, it may be condemned.

That’s what happened to our homeowner in Lancaster. Now, he had to decide if he wanted to invest his money in a new chimney or new hvac system. 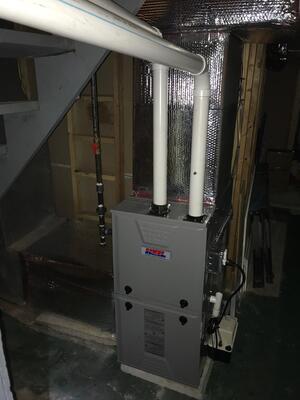 INSTALLING A HEATER THAT DOESN’T NEED A CHIMNEY

New, high-efficiency heating systems don’t require a chimney for exhaust. This is helpful in homes without smokestacks. It’s also a good option for situations like this one, where the structure is condemned.

To understand this, let’s start with what high-efficiency means. In HVAC, that’s a system that uses less energy than similar heaters to produce the same results.

For instance, let’s say you had two gas furnaces capable of producing up to 10,000 British Thermal Units, or BTU’s, per hour. The one that uses less gas to produce the 10,000 BTU’s is the more energy-efficient one.

When it comes to exhaust, this is important for a different reason. That’s because high-efficiency systems don’t need a flue or smokestack for exhaust. Instead, they use PVC piping. The piping runs horizontally and out of the home through a wall.

With a high-efficiency gas furnace, then, our homeowner didn’t need his chimney. That meant he didn’t have to pay thousands of dollars to fix it. Now he would bypass it with his new furnace and water heater.

Of course, this option meant he needed to invest in a new heating system. But, there were some benefits to this solution.

First, the system he had was nearly ten years old. That doesn’t mean it’s ready for replacement. In fact, most of them last for 15 to 20 years. But, our homeowner didn’t want to consider making another big investment so soon.

Next, a high-efficiency system would help him save money over time. In this way, our homeowner turned around a bad situation.

We mentioned before that a high-efficiency gas furnace uses less energy than other models. That means it costs less to run. Since our homeowner pays for the gas he uses, he’s paying now paying less on his monthly energy bills.

Gas consumption in a furnace is measured with an AFUE rating. That stands for “Annual Fuel Utilization Efficiency.” It measures how much gas is used to heat the house and how much gets lost in the exhaust system without being used.

The AFUE is expressed in a percentage. His old unit had an 85 percent AFUE rating. It wasted 15 percent of the gas he paid for. The new one, however, has a 95 percent AFUE. It uses ten percent more of the gas that comes into the system.

Over time, then, the new system will pay for itself in savings. We also alerted our homeowner to an upfront financial benefit.

That benefit came courtesy of their energy provider, PPL. The gas company offers rebates to people who replace old furnaces with energy-efficient ones. The new heater fits the requirements. As a result, our homeowner received a $500 rebate that went toward buying the unit.

Our homeowner had a major problem with his home’s ventilation system. Fortunately, we were able to help him make the most of the situation. Now, he has a new system that uses less energy — and will cost him less in the long run.

Are you ready for a new heating and cooling system? Contact us, and we’ll design a system that’s perfect for you!